Don’t watch the clock, do what it does – keep on going !
In Life – where you are not is just as important as where you are. Las Vegas, the small city in Nevada, which has over 42 million visitors a year, has also the tallest freestanding observation tower. This year’s Scale the Strat was a big event, again serving as the Towerrunning USA Championship race
The event itself also had more participants than any year in its history. This year also marked the 10th anniversary of the event, with firefightersclimbing in full gear.

With a few of the top ranked American men unable to make this year’s race, attention turned to the women’s race where 7 of the current ranked top 10 were in attendance.Towerrunning legend Cinday Harris was given the #1 bib as a tribute to her decades of success and competition looked to be close for both men and women

The event started off late, with a 40 minute delay at the beginning. IT issues at the tower prevented the accurate collection of results. Racers had to stay in a side hallway tryingto stay warm and stay focused, while things were fixed, and the first climbers entered the stairwell at about 8:40AM.

In the women’s race, Harris easily raced off to yet another win in 8:42. Though the time was slightly off her very best, she won by over 0:45. 2nd through 7th places were separated by only 0:29. 2nd ranked American Stephanie Hucko finished in 9:29 while 3rd ranked Meg Santanna finished one second behind. Christine Soskins in 9:38 and local Vegas resident Erica Schramm in 9:40 rounded out the top 5.

The men’s race was the closest it had ever been, with the top 3 separated by only 3 seconds. Josh Duncan took home his first Scale the Strat win in 8:10, while world ranked #9 climber Gustavo Mendoza finished in 8:11. Vegas local and 19 year old Greg Billingsly finished in 8:12. Jason Larson at 8:19 and Texas based runner Harrison Kieffer at 8:35 rounded out the male top 5. 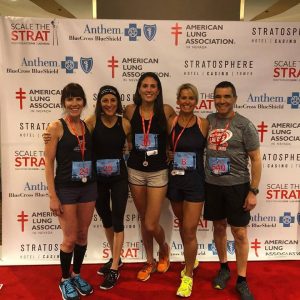 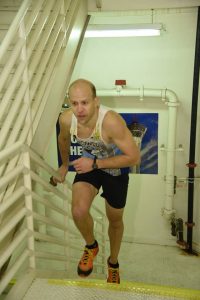 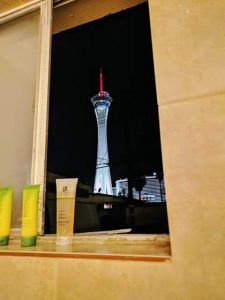 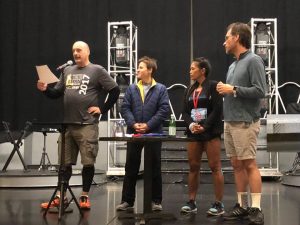 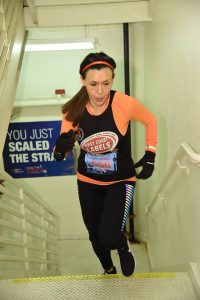 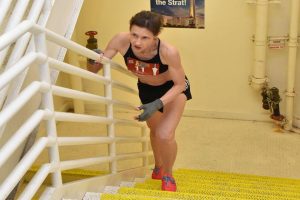 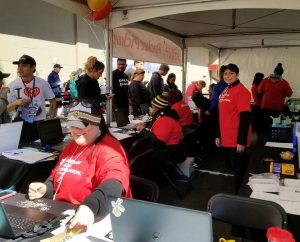 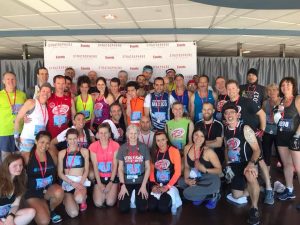 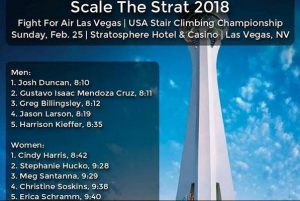