LOROS Tower Run on July 3rd was the first major indoor race in a residential building in Europe after more than a year. It is held at the St. George’s Tower, a student accomodation in the heart of Leicester. This Midlands town hosts the only soccer club besides the “big six” winning trophies recently as well as the LOROS Hospice charity which organizes the yearly Tower Run.

LOROS Tower Run is the only European Towerrunning Tour race which has “survived” the pandemy break. At the 2020 edition held last March we saw strong international competition and wins by course record holders Sarah Frost and Wai Ching Soh. This year despite the corona restrictions more than 150 participants climbed the 20 stories earning a medal and a glass of prosecco at the top.

The international touch of this year’s edition was added by female winner Chiara Cristoni. It was not the first win for the long time London living Italian towerrunner, yet a special one. At her finish the chip mat failed and she had to turn back and step on it again losing a few decisive seconds. Given a second try Chiara managed to repeat her impressive performance and the 2:14 made her female champion. Maybe her recent first half marathon gave her the necessary stamina.

Runner up with a time of 2:15,8 was another experienced towerrunner, Sonja Shakespeare. Still Top 10 in the world ranking she was satisfied with her performance especially as an addition to the family 9 months ago naturally had some influence on her training options. Sonjas versatility is shown by the fact that one of her next goals is London Marathon together with husband David !

The third podium spot in the female race went to Lizzie Jones in 2:30,6. It was her first ever stair race but more will follow. Lizzie is a keen runner, road cyclist too and with her partner also runs the YouTube Channel “Mother Father Runner” for some years.
Noteable the 5th place of Elaine Battson in 2:42,5.

The by far fastest time of the day, 1:32,2,  was provided by Laurence Ball, a well known name in British Towerrunning. Additional to wins and regular podium places in home races Laurence is one of the few UK athletes with continental race experience. 2019 he placed 6th at UFO, a race where most of the world’s Top10 competed.

Funnily married couples sometimes demonstrate their unity by equal placing in their respective races. It happened here too. David Harris like Sonja claimed the runner up spot in 1:44,9. In a 2nd try he clocked the 3rd fastest time of the day too and added another powerwalk carrying the newest family member Emila up to the top. To complete the family records young Ryan finished in 3:13,9.

Third in the male race was Randall Vargas in 1:50,6. Originally from Costa Rica he has lots of experience and success at stair races in Taiwan, including a team win at 101. Following his British wife to London recently he is keen to set his mark in the local Towerrunning community. We will see 🙂

This 6th edition of LOROS Tower Run was a great event under still difficult conditions and the first gettogether after a long time for the  leading force of the sport in the UK, the TotalMotion Towerrunners. 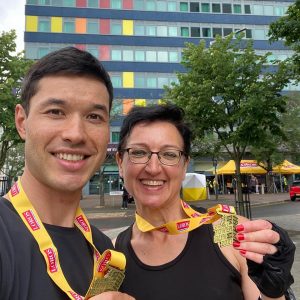 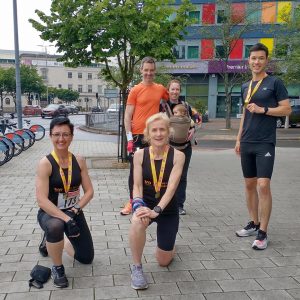 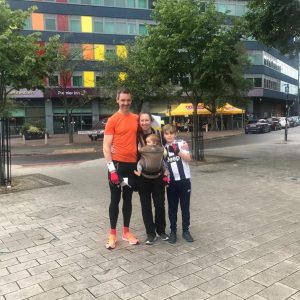 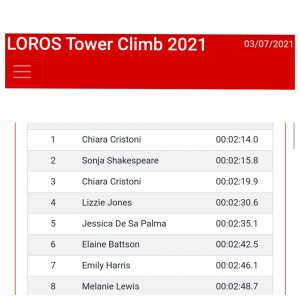 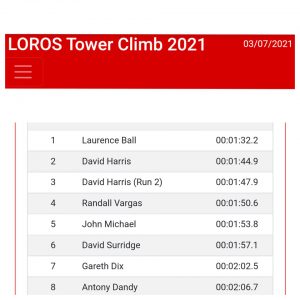 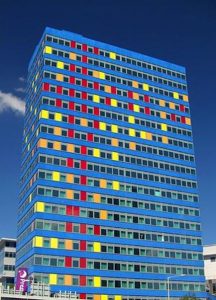